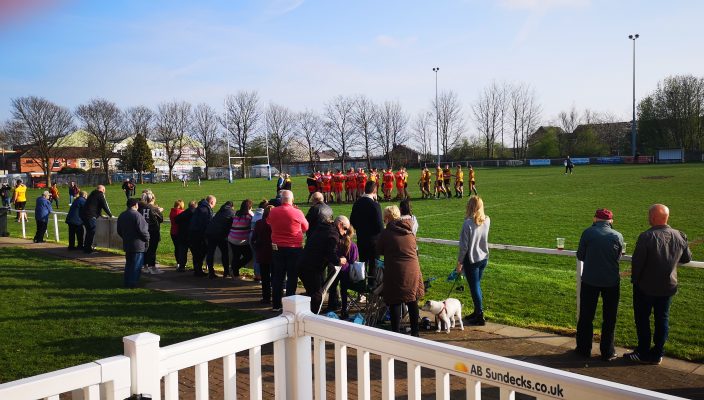 Miners Rangers made it three games unbeaten as a grandstanding last ten minutes saw them overturn a losing position into a commanding victory against one of their bogey teams Kells. Miners had won just one of their last six meetings with the Cumbrians and although it took that late rally to secure the spoils this was a deserved success in a grinding contest.

The importance of the match was evident for both teams as they bid to climb the table and it was Kells who drew first blood as the lively Tyrone Dalton skipped his way through for a six pointer inside the opening five minutes. Miners though were soon on level terms when emergency centre Stuart Johnson showed a dazzling turn of pace from half way, accelerating past the first line of defence and arcing away from fullback Craig Benson as he stormed to the line for a try goaled by Tom Worthington. Miners took the lead for the first time with more quick thinking from another forward pressed into threequarter service, Liam Kenyon with a quickly-taken tapped penalty to dive over the line from close range whilst Kells were still regrouping. The visitors’ frustrations were vented and they were temporarily reduced to twelve men through a sin-binning for dissent but they had narrowed the deficit to two points by the break as Ross Gainford slotted over a penalty for 10-8.

Kells opened the second half strongly despite the man disadvantage and they asked plenty of questions of the Miners’ defence before making the breakthrough to regain the lead around the hour mark, Reece O’Neil finishing smartly at the corner and Gainford’s conversion putting the visitors four points ahead. Miners pushed hard but it appeared the day would end in disappointment until that game-changing final ten minutes, sparked by a foolish penalty concession by Kells driving the ball from the own line as Callum Kinrade led with the elbow, resulting in his sin-binning and the chance for Miners to crank the pressure. That told on the last tackle as the outstanding Darryl Kay burst through the defensive line from close range to dot down behind the posts and seize the advantage back.

Miners turned the screw and were utterly relentless now, swiftly putting the game beyond doubt when Worthington’s deft kick sat up nicely between the Kells’ defenders for Kenyon to nip in and gather the ball before running under the posts and the cake was iced to perfection when Miners pounded at the Kells’ line and Joe Connor blasted through the tackles to ground the ball for another six-pointer.

On Sunday the women’s and under-18s teams were victorious in a Twist Lane double-header, the under-18s beating Oldham St Annes 52-16 whilst the women made it two wins in a row with a 30-0 triumph over Hull.

On Thursday this week the Alliance have an Easter derby at Wigan St Patricks 7.30pm and on Saturday the club hosts trial matches for the county under-19s and the NCL East v West, featuring Miners’ Louis Brogan, from 11am.