The following is a brief history of Leigh Rangers ARLFC.

The club was formed in 1978 by Harold Beazant, Bob Waterworth, Tommy Disley, Ken Pennington and Tommy Coleman – all typical ‘salt of the earth’ Leigh people.

A meeting was held at ‘The Pennington’ Public House, Henry Street, Leigh and it was decided that, due to the impending demise of Senior School Rugby, because of teaching staff curtailing after hours supervision and a move towards non-competitive sport, a void needed filling.  After discussions with Frank Cookson and John Simmons of the then ‘Widnes and District Junior Rugby League’, which was the forerunner of the ‘North West Counties Junior League’, application was made to join at under 12s.  This team mainly consisted of the successful schoolboys town team that had beaten York Schools in the traditional Challenge Cup curtain raiser at Wembley the previous May.  This team was quickly followed by an under 11s team and the two played out the 1978-79 season very successfully.

The 1979-80 season saw the club expanded with teams at under 10s, 11s, 12s, 13s and under 19s. However this team struggled to compete against the demands on players made by the RFL Colts League and was short lived.  By 1982-83 the club was running a team at every age group from 10s to 16s gaining some tremendous quality players throughout the club.

From one team changing behind Waterfields Bakery, the Club moved on in four years to seven teams based at Higher Folds Youth Club using four pitches on Manchester Road and Higher Fold Primary School, which gives you a good impression of the dedication displayed by the coaches, committee and parents, resulting in almost 200 children playing rugby. 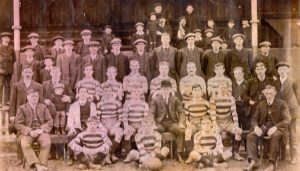 We must not just concentrate in this brief history on the coaches and players, for behind the scenes, a  magnificent group of ladies over the years have contributed enormously to the success of the club and I take this opportunity to mention just a few:

Sadly, Annie and Helen are no longer with us, but through memorial trophies and plaques, they are not forgotten.

I am sure to have missed many ladies out, but the ones mentioned above jump out at you for their efforts collecting subs, running raffles, mending, washing and ironing shirts, the old soup kitchen at Higher Fold, the Port cabins, the Old Ambulance serving tea – all make the rich tapestry that this club has become and to me, the memories of the past lay the foundations for the future.

Oh, I almost forgot – the prize bingo nights – how could we forget those – still it raised an awful lot of money.

The development has not always been a bed of roses. Along the way, we tragically lost two stalwarts in Terry Sutton and Tommy Disley.  Again, definitely not forgotten, as they are remembered formally every presentation night with magnificent trophies being presented in their honour.  Our address at Sutton Park is named after Terry and upstairs in the clubhouse, we have the Disley lounge.

As always from adversity someone picks up the baton of challenge and our current Chairman, Trevor Barton took the helm in 1984 and introduced Mick Govin (Grounds Chairman) and Fred Barwick (Secretary) and with a lot of dedicated people turned Tommy Disley’s dream of a self sufficient independent club with changing facilities of our own into reality.

The first steps in 1990/1 were to reclaim derelict land along Manchester Road and create a full sized (now enclosed) Senior pitch, as good a surface as you would see anywhere in the country. It cost about thirty thousand pounds.

Trevor’s philosophy is ‘Lets Do It’ and sure enough, the land was transformed from a scene reminiscent of the ‘Somme’ to the pristine pitch we have today.

Then of course came the clubhouse, opened on the 28th December 1995.

The same Trevor Barton philosophy of  ‘Let’s Do It’ resulted in raising one hundred and thirty thousand pounds which included a very welcome grant of sixty thousand pounds from the ‘Foundation for Sport and Art’ (an organization linked to the football pools).

With this, the clubhouse was built and we later spent a further thirty eight thousand pounds on the car park, with half the money coming from a council grant.

Once again, Trevor Barton’s organizational skills put together an executive committee consisting of Fred Barwick, Mick Govin, Kevin Doorey, Alf Ridyard, Bernard Linley, Joe Cooney, Steve Donlan and Cliff Littler.  For example, fifty thousand pounds was raised by riding bikes, holding concerts, sponsored walks, tackles, buy a brick, sell your grandmother, anything to raise money – but walk down Manchester Road and you will see the evidence and results of a few saddle sore, overweight adults in all its glory.

Back to the playing side – we have to date produced over one hundred professional players including household names such as – Dennis Betts, Darren Wright, Tommy Martyn, Simon Booth, Scott Naylor, Steven Blakeley, Mickey Higham, Paul Rowley and the two Stewarts – Donlan and Littler.

These are just a few examples – the others are no less significant in their dedication to our club and their chosen profession, but our club prides itself on the development of Billy Smith or Joey Jones in helping to guide them through their teenage years and become good citizens of the future and to continue at the Senior Club on Twist Lane and try to achieve amateur honours, or just to develop their social rugby skills.

More on the development side – in our formative years we joined forces with Widnes tigers and produced a select side to entertain French Touring sides. As we further developed, we undertook to tour ourselves initially just the day trips to Cumbria or Yorkshire, but then progressing to three and four day tours – Hunslet Boys Club, Heworth and Stanningley over the hill in Yorkshire, all of which were extremely enjoyable and successful and provide our bar room story tellers with enough ‘Tales on Tour’ to become a top quality after dinner speaker.

From these tours our horizons grew wider and a week’s tour to France for two teams became part of the clubs itinerary.  Once again, fund raising by parents, children and coaches came to the fore and from travelling by coach and ferry, we now fly to France.

All this is a far, far cry from changing behind Waterfields Bakery using borrowed kit!

Each of our ten teams now has a kit provided by one of our twenty or so Sponsors.

Which leads to another one of our ventures – the Annual Fund Raising Dinner.  Back in 1983, this was a daring exercise for a Junior Club, but the business people of Leigh and other towns backed us with their support and much needed money and they still do to this day through our now renamed ‘Annual Sponsors Dinner’.

We as a club would find it extremely difficult to progress without these sponsors who supply the fuel for our ship. Everyone at Leigh Miners Rangers says ‘Thank you’ to everyone who has helped us. We will continue to supply the muscle to pull up the sails and our ship of youthful sporting opportunity will sail on.

Please keep the support going – I am too old to get saddle sore again!!!!!