Miners Rangers completed an historic treble as they stormed back from 20-6 down at half time to edge Siddal 22-20 in one of the most thrilling NCL Grand Finals. It was fitting that one of the most successful and epic seasons in the club’s history should culminate in this most gripping of finals as a tremendous second half showing earned Miners their third piece of silverware of 2015. Led superbly by man of the match Scott O’Brien, the scrum-half winning his third match award of Miners’ last four showpiece finals, and with Brad Hargreaves adding two more to his tally as Premier Division top tryscorer, Miners stunned a Siddal side who seemingly had one hand on the trophy with that commanding interval lead.

On the back of their Twist Lane demolition job two weeks previously, Siddal unsurprisingly named an unchanged 17 for this match, whilst Miners were without Jonny Youds and Mick O’Boyle, the former suffering a dislocated shoulder in the win over Mayfield whilst the latter is working overseas. However Connor Ratcliffe and Adam Thomason returned, at loose-forward and on the bench respectively, to bolster the team.

Siddal opened proceedings as they had left off at WN7 a fortnight previously, early pressure winning them a penalty and from the position on the Miners’ line a drop-off pass from Sean McCormack at acting half put George Ambler crashing through beside the posts, Gavin Stead goaling. Miners responded positively though and they were swiftly back on terms, Tommy Parkinson running the angle to perfection as he burst onto the ball twenty-five metres out and blasting through three attempted tackles en route to the line, O’Brien adding the conversion. That ignited a purple patch for the league winners, who had Siddal on the ropes but couldn’t find the second score, first when Ratcliffe made a searing break downfield only for the Chevinedgers to scramble back to recover, then when O’Brien placed the kick in-goal, scampered in and tried to tip the ball back for Hargreaves but was ruled to have gone over the dead-ball line. Miners then saw a promising position from O’Brien’s forty-twenty come to naught as the pass wide went into touch and that in turn saw Siddal gain the ascendancy, with their hookers McCormack and his replacement Craig Sanderson invariably making quick yards with their sniping runs from acting half and the powerful pack gaining headway. The Halifax club regained the lead on twenty minutes when Shaun Garrod looped the pass out wide and Gareth Blackburn was in at the wing to score, then they piled on ten points in the ten minutes before the break, first when McCormack was lively at the play-the-ball and passed right for Iain Davies to crash over via the post protector and despite a despairing defensive effort, then when Stead added a penalty after Miners were adjudged to have taken Chris Brooke out off the ball. Siddal, led by the outstanding Richard Merville, were clicking ominously through the gears and an inspired offload by Davies put them breaking clear only for the scoring pass to Ambler to go to ground. But Miners were up against it with the closing act of the half, Matt Astley sin-binned for tripping as Garrod broke through and Stead adding the resultant penalty for that 20-6 lead.

A man light and 14 points adrift, Miners needed the first score of the second half and that duly arrived as they pressed the Siddal line and fired the ball left as Jimmy Muir put Hargreaves cutting in for his first, O’Brien showing that the kicking practice with Miners’ old boy Martyn Ridyard hadn’t been in vain as he landed a fine touchline effort. Despite their healthy position Siddal’s discipline began to creak and they were arguably fortunate to retain a full complement as they set about testing just how indestructible O’Brien and his Miners’ team-mates were, the scrum-half copping a spear tackle and a late high shot, in addition to an accidental clash of heads with Danny Williams which left both men prone, but as the needle crept in to the Chevinedgers’ game Miners cranked the pressure up as Muir and Hargreaves again combined just after the hour, the stand-off putting the big centre sliding in for his second and O’Brien again with the conversion. With two points separating the teams and the rain teeming down Miners pressed for the winner, which almost arrived as Ellis Grimes scrambled a kick in-field on the last but Thomason couldn’t gather the ball cleanly as the chance went begging. With Ratcliffe, Dowie and O’Brien all breaking the line but Siddal just about hanging on it seemed the efforts would be in vain but with the clock ticking down O’Brien kicked over the line and Dowie nipped in to gather before passing right for Grimes to dive in at the corner flag, sealing the win in the final act of a most memorable campaign. 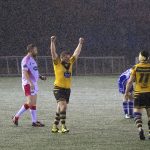 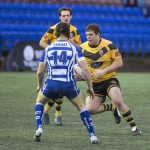 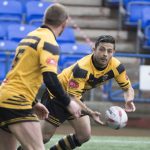 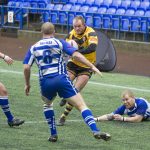 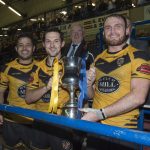 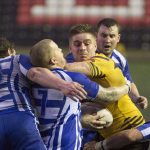 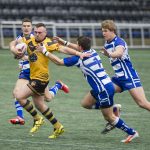 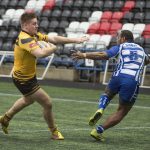 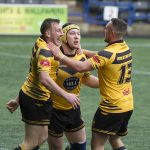 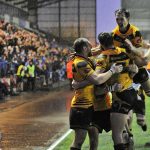 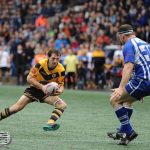 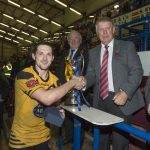 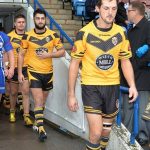 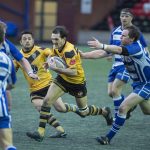 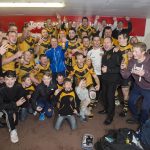 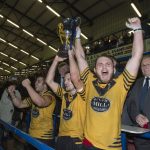 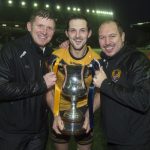 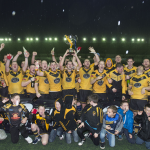 « Treble Winners 2015 JOIN US FOR THE AWARDS & CHRISTMAS PARTY EVENING »