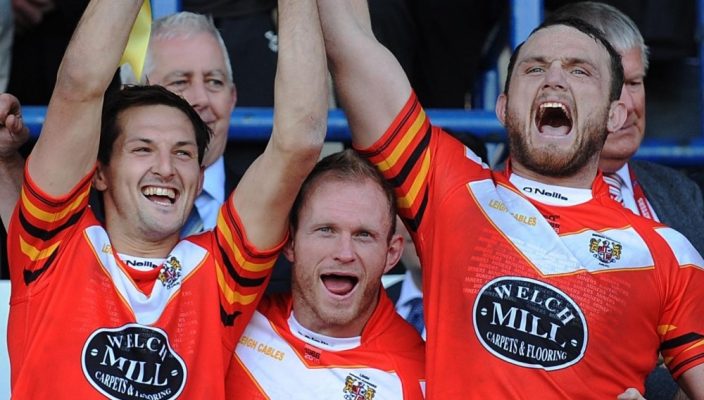 Miners Rangers reclaimed the Conference Challenge Trophy with a hard-fought win against Wath Brow Hornets at Widnes’ Select Security Stadium. In the curtain raiser on the Kingstone Press Championship Finals day the two amateur club heavyweights served up a game which ebbed and flowed throughout, as might have been anticipated between two teams approaching the business end of the season in strong form. Miners, twice winners of this competition in the last three years, had claimed the NCL league winner’s trophy the previous weekend whilst Brow seriously threaten the top four and know their way to Widnes better than most, having contested the last three NCL Grand Finals on the 3G surface. Miners, resplendent in their new red and white kit to celebrate the club’s impending fiftieth anniversary, were able to recall Darryl Kay and Connor Partington, Adam Thomason and Ellis Grimes making way.

Brow, stepping off the red-eye down from West Cumbria and roared on by their travelling support, opened strongly and Miners were forced to withstand significant early pressure, with the breakthrough eventually coming on ten minutes when Scott Pink stepped through a gap on half way and then accelerated away, cutting inside the fullback to score under the posts, Cole Walker-Taylor converting. That was Brow’s sole reward for their early dominance though and Miners began to claw their way back into the game, Jonny Youds bundled into touch as he dived for the line but the levelling score arriving when Kay charged down the middle and offloaded for Scott O’Brien who in turn found Andrew Groves with the pace to scorch in from 30 metres out, Youds goaling. Just four minutes later and the Leigh side had the lead, some fine rugby first pegging Brow down in the right hand corner then whipping the ball at speed to the left flank where Jimmy Muir cut back inside his marker to score, Youds with the extras, and Miners finished the half strongly with Youds and Matt Astley both held up over the line.

Brow started the second half in similar style to the first and they were back on terms when Pink managed to smuggle the pass out of the tackle twenty metres short to his winger Luke Davison, who scored at the corner with Walker-Taylor adding the conversion. But the turning point of the match came when the red mist descended on Brow’s Lewis McCarron, head-butting Partington in the tackle which sparked a brief fracas and culminated in the Brow back-row being sent off. With the man advantage for the better part of half an hour the game appeared in Miners’ grasp and with Shaun Dowie, Muir and O’Brien on form they duly took advantage when O’Brien danced along the line before finding the gap to wriggle through beside the posts, Youds converting and then landing a long-range penalty when Charlie Tomlinson was found guilty of holding down. With twelve minutes remaining the game appeared in the bag as O’Brien created the gap and the supporting Groves was in support to dive over the line. Brow though didn’t give up and they set a few nerves jangling as Miners lost the ball clearing their own lines and Davison scooped the stray ball up twenty metres out and scooted in. Miners had further chances as Youds and Partington were both hauled down from promising breaks but the try did arrive as Muir and then Astley kept the ball alive on the last and O’Brien was in for his second, converting his own score. Brow had the final word as Marc Jackson offloaded under the posts and Mark Watson dived over but it was too little too late for Brow as Miners celebrated the second piece of silverware in as many weeks. 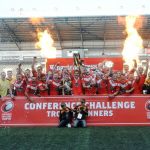 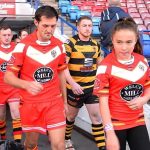 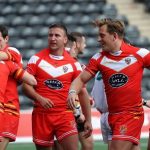 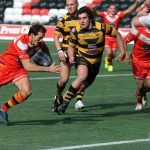 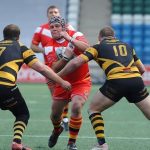 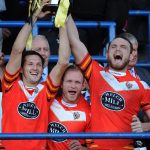 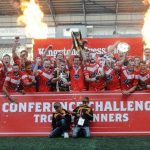 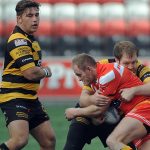 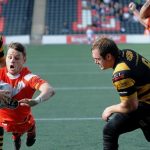