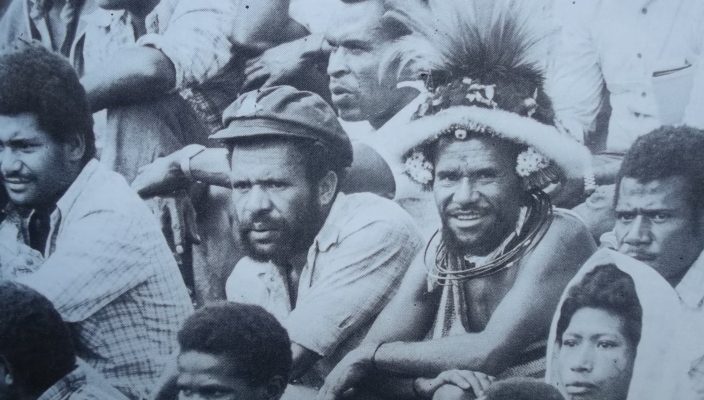 At first glance there might not be much in common between Miners Rangers’ home town and the south Pacific nation, beyond a mutual fervour for rugby league, but links between the two date back to 1978. In May of that year the BARLA touring side embarked on a journey which arguably set a benchmark unsurpassed to this day for voyaging into the unknown, departing Manchester Airport and travelling over 36 hours via Doha, Delhi, Hong Kong and Manila before a somewhat rocky landing in the Papuan capital Port Moresby.

Three Miners players were on the touring party, including John Roberts, Rod Lewis and the tour vice-captain Paul Dowling deputy to the Hull Aces stalwart Bob Colgrave. The first thing which struck the tourists on landing at their final destination, Rabaul on the island of New Britain, over two hours’ flight east of Port Moresby, was the extreme humidity and heat but, nothing daunted, within a few hours of landing they staged their first training session, watched by an estimated 800 curious locals.

The tour matches ran the gamut of extremes, with the opener at Nabaul bringing a 41-13 win over Islands Zone, Dowling playing the full match and Roberts making a late substitute appearance, but Hull star Steve Critchenson grabbed the headlines with four tries in a win in front of 5,000 spectators. The enjoyment of the opening game was sourly overshadowed in the following fixture, a midweek encounter with Northern Zone at Lae which was abandoned on 74 minutes after a mass pitch invasion by the increasingly-hostile crowd saw a number of the British players assaulted, the hapless Dennis Oaten coming off worst for wear. This was something of a minor international incident, with the tour managers and representatives of the PNG Rugby League and the Police meeting at the residence of the British High Commissioner to discuss the appropriate measures to ensure the remainder of the tour passed incident-free.

Thankfully the next game against Highlands Zone at Mount Hagen passed smoothly, a crowd of over 7,000 treating the British team to a cordial reception and witnessing arguably the best match of the tour, BARLA edging home 26-25 with Peter Glover landing seven goals. In the final warm-up game before the Test match BARLA lost 27-15 to Southern Zone despite two Dowling tries. The historic Test match against the full Kumuls’ national team saw BARLA dominant to win 28-7 before over 14,000 fans at Port Moresby’s stadium. All three touring Miners played with Dowling again scoring a brace.

After a month on PNG the tourists continued their exhausting journey and went down 28-2 to Combined Universities in Balmain, perhaps not surprising given this was just three days after the PNG Test. Further games followed against Australian Universities (won 23-10) and then on to Wellington, New Zealand (lost 20-13) and a final live televised game against Waikato which BARLA won 7-5, although the Miners’ men were sparingly used in these latter matches.

Twelve months on from that historic BARLA epic and tourists turned hosts as the PNG national side visited the UK for a reciprocal tour, which included paying a visit to meet their old sparring partners at Miners, the Kumuls calling in at Twist Lane ahead of attending the Leigh v Barrow game at Hilton Park.

Since those days the Papuans have gone on to prove their worth at international level as arguably the ‘best of the rest’ outside the big three in the international game. However Miners’ links with the island weren’t quite finished and on 13th February 1999 Miners made history as they reached the fourth round of the Challenge Cup for the first time, courtesy of a win over Bramley at Headingley. The reward was a home tie against Northern Ford Premiership giants Hull KR, who had finished second in the league the previous season. In the Robins’ ranks was a certain Stanley Gene, the most famous Papuan player of his generation, and already established as a star performer in his third season at New Craven Park. In the event the game went with the form-book, although the 52-0 scoreline didn’t fully reflect Miners’ contribution to the game. Referee Colin Morris certainly didn’t enter into the spirit of things, earning himself a Changing Rooms experience after sending off Mark Meadows and then further depleting Miners’ ranks with a red card for substitute Lee Lomax as he responded to baiting from the travelling supporters in the Hilton Park crowd. The representatives of the press also failed to capture the romance of the occasion, nominating Gene as man of the match although the Kumul wrecking-ball found a worthy adversary in Miners’ fullback Peter Sharpe, who produced a number of try-saving tackles. Rovers’ tries came from Jon Wray and Paul Fletcher with hat-tricks, Gene, Ian Hughs, Kevin Gray and Richard Smith, Gray and Chris Kitching each with three goals.

Urban legend at Twist Lane has held that Gene had originally cut his teeth as a teenager playing against the BARLA tourists of 1978, and that would have made him nudging towards the big 4-0 in 1999. Stanley has always been notoriously tight-lipped about his date of birth but he couldn’t have matched-up against two generations of Dowlings….could he? 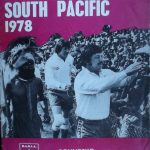 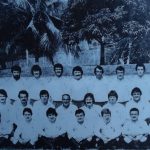 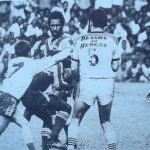 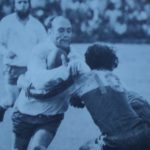 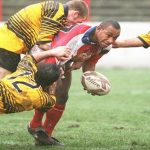 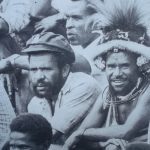