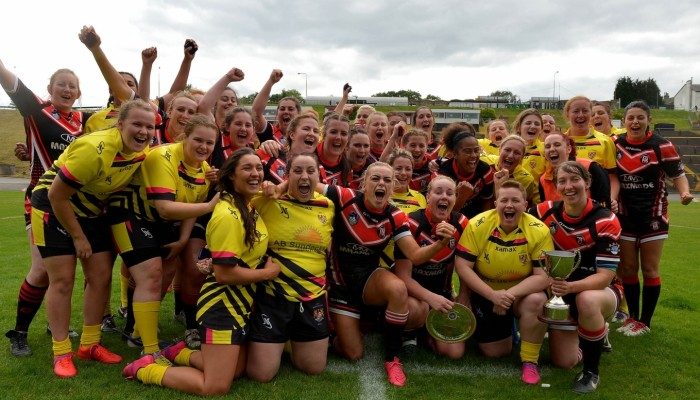 Handbags At Kick Off With Hayley MacDonald

Following on from my piece last week on Jo Phillips, (Thank you Jo!) this week I decided to cross back over to my side of the Pennines with the lovely Celia Farrimond of Leigh Miners Ladies back to my own stomping ground in Leigh, Lancashire.

Being a fellow ‘Leyther’ lady I can identify so much with her early life upon the terraces at good old ‘Hilton Park’ our now defunct home ground until 2008 which was one of those ‘traditional grounds’ with the open toilets and the ability to switch ends at Half time, where families mingled with players’ families in the bars and beer was a Quid a pint! There are times as a Leigh fan, I miss that place and remember as a child running on the pitch asking for tie-ups from the players, although the modern LSV is very impressive and something many Leythers are very proud to be able to utilise and call ‘Home’.

Leigh Miners Ladies in 2017 will be playing their matches in the Women’s Premier Division Campaign, they ended last season as Challenge Cup Finalists and were Champions of the Group 2 Grand final in 2016, gaining much needed publicity for the sport.
Miners Men’s Head Coach Jason Seddon previously said “The Team are playing at a High Level and include several international representative players,”
“Leigh Miners Rangers are committed to remain one of the leading teams in Women’s League”

Leigh Miners Ladies and Girls teams recently used a well-received initiative to encourage other ladies and girls to join them using quotes from current players which began .. “Because of Rugby League I…” these were displayed outside the Leigh Sports Village ahead of the friendly match between Leigh Centurions and Wigan Warriors, yet another fantastic promotion of the game from their extremely proud teams!
*Please see the comments section for just a few of these.

Here is Celia’s story….
Rugby league has always been in my life….while my friends went to swimming lessons and dance classes, I spent my Sundays on the terraces at Hilton Park. My dad played, my brothers played, but in the 90s there was never the option for me to play. We tried unsuccessfully to set up teams at school but there were never enough girls interested, so I was in my 20s when I started playing.
Fast forward 10 years and I’m now a proud member of one of the most successful ladies rugby league teams in the country, Leigh Miners Ladies, and it just happens to be in my hometown. 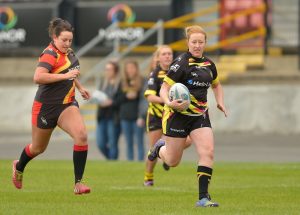 Our team is a proper mixed bag of ages, backgrounds and careers. We’ve got students, teachers, project managers, mums, carers, health professionals and even a mechanical engineer just to name a few and the ages range from 16-40 (ish). It’s scary to think I left school before some of my team-mates were born!!

That’s one of the exceptional things about ladies rugby though – it brings people together who may not necessarily meet in other walks of life, and these people turn out to be your best friends for life!

I asked some of the girls about their reasons for playing rugby league and what keeps them involved…
Megan started playing after a taster session in high school where she found she had a talent she wanted to pursue. Now she plays because of the team ethos, the fun and the socials. And the fitness element is a bonus! It has opened up opportunities for her to attend England trials and play for Lancashire.

Leanne started playing in primary school because her head-teacher said she’d be good at it – and he was right!
Rhianne started out playing rugby union 11 years ago and quickly progressed to county and national levels. She then switched to rugby league in 2014 because the game suited her style of play and now she plays league in summer and union in winter! She still loves every time she puts her boots on and runs out with her team-mates.

Everybody who plays the game comments on the inclusive nature of the sport….and our fans are mainly made up of family, friends and ex players who just can’t leave the game for good! We’re also very well supported by the Leigh Miners club with finances, facilities, coaching and opportunities for which we are very grateful!

I think we are so lucky to be involved in a sport we love, a sport that is progressing and a sport where we learn something new every time we put on our boots. There really is a position or role for everyone in ladies rugby league. 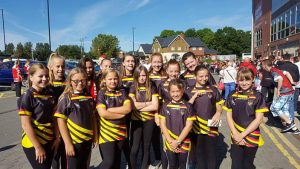 Having said that, I’m not getting any younger now and I keep threatening to hang up my boots. I’ve completed my level 2 coaching badge and now coach Leigh Miners Girls under 12s and under 14s….but that’s another story!

However, the lure of ‘one more year,’ my team-mates pecking my head and hundreds of other reasons means I just cannot give up the game I love!