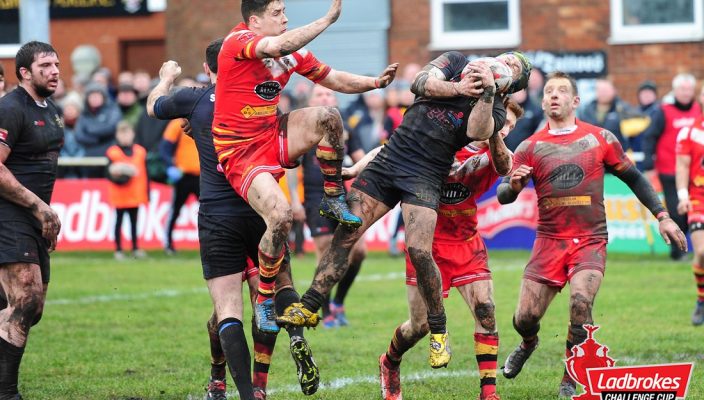 The biggest stage amateur rugby has ever enjoyed bore witness to a thrilling cup derby in the best old-fashioned mud and thunder traditions as a try in the dying stages saw St Pats make progress at Miners’ expense, although coach Jason Seddon in his first game at the helm will have seen plenty cause for optimism from a new-look Miners side.

Heavy morning rain had thankfully largely cleared and the Twist Lane ground lay resplendent with the Ladbrokes branding, the BBC coverage and the Challenge Cup itself gracing the pitch.

Miners welcomed Josh Ward back into the fold for the first time since 2013 whilst debuts were handed to the impressive Jack Reynolds, Jake Ellis, Andy Philbin and youth teamer Louis Brogan.

Pats had their own new faces in wingers Jack Winnard and James Ratcliffe whilst with Joe Prior signing for Coventry in midweek meant it was a new-look halfback pairing of Mike Scrivens and Ryan Baxter.

Miners opened brightly in the heavy conditions but Pats held firm and on their first attack of note they had the lead, Baxter’s cross-field kick initially appearing unthreatening as Tom Woodcock had to back-track to collect it but the centre flung the pass wide for winger Winnard to streak in at the corner, Ratcliffe with an excellent conversion.

Both sides had their chances but defences were on top, Miners’ best chance coming via a scintillating break from Will Ashworth and Ward, Pats scrambling back to keep their line intact.

However just after the half hour Miners were on the scoresheet as Reynolds took the line on and threw the pass left for Mick O’Boyle to break through. The conversion was wide but before half time Miners were level as Jonny Youds landed a penalty to send his side in on terms.

Pats though regained their advantage early in the second half as Danny Ryding forced his way through two tackles to touch down out wide.

Miners responded well and took the lead for the first time in the game with a piece of individual brilliance from eventual man of the match Reynolds, the stand-off dropping his shoulder and darting through the gap from fifteen metres out, Youds goaling to nudge the hosts ahead.

Had Miners scored again at this stage it is likely they would have confirmed the win and they came agonisingly close as a grubber kick was fumbled by the Pats’ defence only for the ball to be touched dead in-goal by the defender a split-second before Ward claimed the touchdown.

With five minutes remaining Pats snatched the win with some fine rugby of their own, Scrivens breaking on half way and offloading for the supporting Phil Mitchell to charge through from thirty metres out for the score which sent his team through to round two.

« Challenge Cup Fever Handbags At Kick Off With Hayley MacDonald »