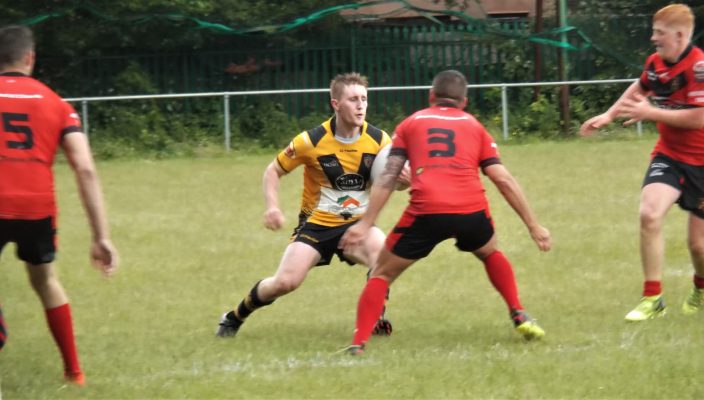 Miners Rangers maintained their fine recent form with this hard-fought derby win to complete a double over battling Rose Bridge. The Wigan side might be toiling near the basement of the league but they are certainly no pushovers and Minershad to show resilience, particularly during the second half, to secure the spoils. Missing a number of key players through injury or suspension Miners opened brightly but were undone through Bridge’s first meaningful foray into the opposition territory as some improvised play near the line saw the ball fall into the hands of big prop Jack Morrison and he couldn’t be stopped from five metres out to score under the posts. However Miners swiftly responded as they won a scrum near the Bridge line and the ball wasshipped right for Jack Reynolds to cut through out wide and then add the extras himself. Miners were now dominating and they saw further chances go begging but as the heavens opened and a torrential downpour marked the latter stages of the first half the floodgates finally opened in the Ince defence with the impressive Deacon Monks finishing off well on both occasions, firstly from a break downfield and then a chip and regather by Scott O’Brien which the centre supported to finish off, Reynolds with both conversions for 18-6 at the break. 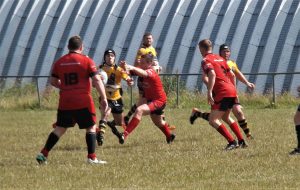 0Miners began the second half positively but couldn’t find the try which would surely have put the game to bed and Ince rallied strongly to dominate territory and possession for long spells, only to find an utterly resilient Miners’ defensiveeffort led by Monks, O’Brien, Mick O’Boyle and Jake Lloyd. Even when the home side did break through they were denied, twice for forward pass and perhaps most controversially for failing to ground the ball properly as some desperate line defence held Jamie Malone out. Finally the home side did get some reward with a try for Malone in the closing stages but it was too little, too late as Miners held on for the vital win.

The Alliance lost narrowly despite a valiant effort against Latchford 20-12 whilst Sunday saw the women return from Barrow with a 38-6 win with tries for Rhianna Burke (2), Keli Morris (2), Anna Croft, Celia Farrimond (also three goals), Mairead Quinn and Tysha Harper to follow two wins over Yorkshire opposition for the girls’ teams. The under-18s however turned in the performance of the weekend to see off unbeaten Lock Lane in an epic National Cup semi-final at Twist Lane and book a finals day at Featherstone on 7th July. Against a top-notch opponent the youngsters emerged victorious 24-12 to seal their finals place.