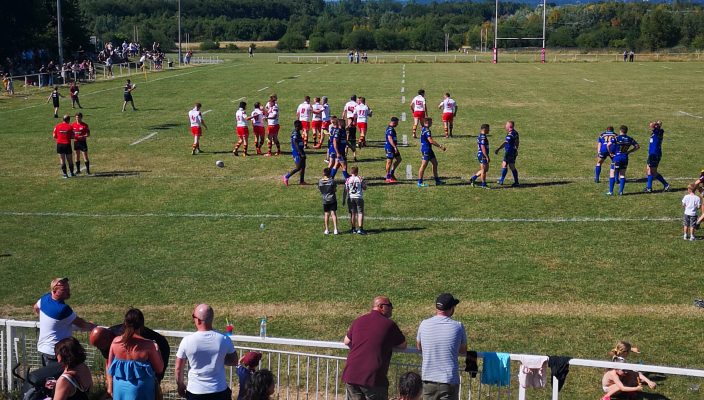 The 2018 Pit Stop weekend proved another tremendous success as blazing conditions saw the three days of action produce some entertaining matches for packed crowds as funds were raised for Teenage Cancer Trust and Wigan & Leigh Hospice. Following the Miners Masters v Leigh Past Players on Friday the first team took centre stage on Saturday as they hosted York Acorn in a vital league encounter. With the Winter Hill smoke providing an ominous backdrop Miners were caught cold early in proceedings as Anthony Chilton’s bomb was allowed to bounce in the in-goal and Matt Swales sneaked in to touch the ball down for the try, Chilton goaling. Miners swiftly responded with two quickfire tries from Deacon Monks as Miners astutely worked the overlap on the left channel on both occasions, Monks showing good finishing instinct to beat the defence for the touchdowns, Jack Reynolds goaling the first to put Miners ahead at 10-6. Further half-chances came and went but Acorn were never out of the game and they ended the half in the lead as Jordan Potter stole the ball one-on-one on the halfway line before sprinting clear to give his team a two point lead at the break.

The see-saw nature of the game continued in the second half as Reynolds finished well from close range to now have Miners two points ahead 14-12before the game was delayed following an injury to the hapless Matt Downes as he jarred his knee landing awkwardly. However the visitors put that setback behind them and belied their recent league struggles as they posted two tries to open a ten point advantage. First another towering kick by Anthony Chilton bounced up for his younger brother Matt to storm in and touch down under the posts, and when Lewis Lord wrestled over from acting half for another six-pointer Acorn appeared set for only their second win in the last seven games. Miners can’t be written off this season though and they finished strongly. Martin Gray, making his first appearance for several weeks, stepped his way through as the gap opened up for him from ten metres out to narrow the deficit and Miners were on terms with five minutes remaining as big Joe Connor was unstoppable from close range, driving over the line with Scott O’Brien’s conversion levelling matters. Content with a draw? Not a chance of it and Miners pushed hard to the finish to get their reward and break gallant Acorn’s spirit with barely a minute left on the clock as Craig Ashall showed nerves of steel to drop the winning goal and send his team second in the table.

The Alliance team saw opponents Hindpool forfeit the league and cup double header whilst the women lost narrowly in golden point extra-time in the cup tie at Stanningley 22-18. The girls teams went down to narrow defeats to Cutsyke (28-16)at under-12s and Hull KR (26-14) under-14s. The under-18s were victorious against Woolston 36-12. In this warm-up match against a team which reached the semi-final of the National Cup Miners had tries for Callum Wallace (2), Lewis Clarke (2), Ollie Crompton and Ethan Jones.

This Saturday the Alliance host Wigan St Patricks with a 2.30pm kick off whilst the first team travel to Featherstone Lions. On Sunday the under-18s face old foes Blackbrook in the BARLA National Youth Cup final at Featherstone Rovers, the match concluding a full day of junior and youth finals at Post Office Road, in what should be an absorbing contest. A supporters’ coach is travelling to the game and anyone interested should contact the club as places will be limited.