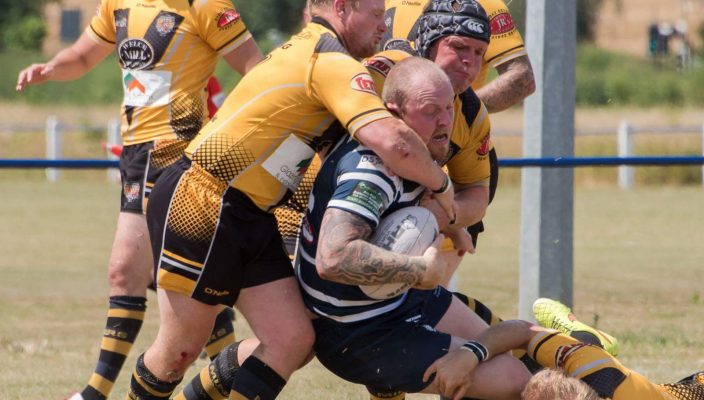 LIGHTNING struck twice for Miners as for the second weekend in succession a last-minute Craig Ashall dropped goal secured maximum points from a testing trip to Featherstone Lions.

The Yorkshire outfit had dealt Miners a real mauling in the reverse meeting at Twist Lane earlier in the campaign but this was sweet revenge to keep Miners on the coat-tails of leaders Thornhill Trojans as the promotion race enters the final third of the season.

In broiling conditions Miners had to battle back twice from deficits, despite racing into a 10-0 lead with tries for Jack Reynolds and Todd Fenlon.

Injuries and unavailabilities swiftly reduced Miners to fifteen players within the opening quarter of the game however the depleted ranks rallied with tremendous spirit despite the home side roaring back to open a strong lead.

A swift brace from Deacon Monks hauled Miners back into contention and when big Joe Connor charged over late on the visitors led by two points.

It appeared though they would have to settle for a draw as Ian Jackson’s penalty levelled matters with minutes remaining but the nerveless Ashall was the right man on the right spot once again to repeat his heroics from the previous weekend and keep Miners pushing strongly for an automatic promotion spot.

Twenty four hours later and just a mile or so across town the under-18s faced Blackbrook at Post Office Road in the National Cup final and the two old foes served up a classic attritional battle in even more scorching conditions.

Brook held a narrow interval advantage which they doubled midway through the second half and although the outstanding Louis Brogan halved arrears the clock was against the youngsters as they fell short 12-6.