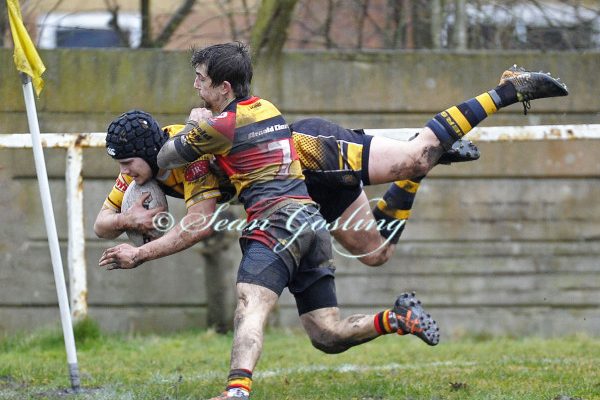 Miners Off To Winning Start

LEIGH Miners Rangers made the perfect start to the 2018 Division One campaign with a convincing victory over one of the promotion contenders Pilkington Recs. 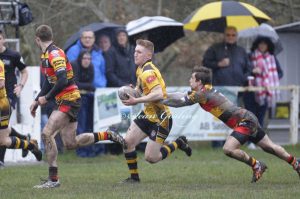 Whilst there is a long, hard season ahead Miners can draw encouragement for their own promotion credentials from this committed display in both attack and defence with a youthful threequarter line ably supporting a robust forward effort. In miry conditions this was always going to be an arm-wrestle of a contest but it was a gripping affair nonetheless as Miners dominated the first half but only led 4-0 and were then swiftly pegged back after the interval before pushing on to finish strongly.

Miners bossed the opening period, their ferocious defence keeping Pilks penned deep in their own half for long periods and the only time the visitors ventured over the half way line in the second quarter was on the back of the excellent kicking game of the visitors’ Danny Lynch and Tom Roughley. On those occasions they found Will Ashworth, Rob Crompton and Todd Fenlon returning the ball with interest whilst the pack effort of Chris Bower, Matt Astley, Joe Connor, Mick O’Boyle and Mark Thomas consistently made yards up the middle. However in the conditions handling was difficult and the sole score of the half came when Ashworth and Adam Thomason put Fenlon diving acrobatically in at the corner flag for 4-0. 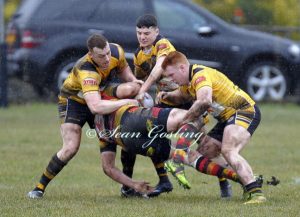 Pilks had been very much second best but they were back on terms within two minutes of the restart as a fine break from inside his own half by Roughley cut through the Miners defence down the middle and Jake Hodson supported to finish by the left corner. That sparked a period when the game was in the balance as Pilks pushed strongly but Miners critically had the next score as Jake Lloyd scooted over from acting half and Jack Reynolds’ conversion, swiftly followed by a penalty, nudged Miners two scores clear. The visitors’ hopes finally faded when a break by the outstanding debutant Calum Coleman was halted by a trip from fullback Ryan Hilliard, the custodian earning a red card for his efforts, and within minutes Miners had sealed the game when Thomason spotted a gap twenty metres out and stepped on the gas to cut through under the posts. Pilks had some consolation when Hodson finished from close range for his second try but Miners had the final word in a thoroughly-satisfying performance as Astley’s drive and offload set the position for Joe Digby to stride over at the left corner, Reynolds with a fine conversion to seal the win.

The Alliance team travelled to a strong Simms Cross and lost out despite a valiant effort as the Widnes side finished strongly. It was meanwhile a proud morning for the club as the two girls’ teams played their first matches solely under the Leigh Miners Rangers banner. Having debuted in 2017 in partnership with Thatto Heath this was a first independent outing and the under-12s edged a titanic tussle with East Leeds 36-30 before the under-14s outgunned a spirited Ashton 54-6.

This Saturday all teams are away with the first team travelling to Shaw Cross. On Sunday 18th the under-18s entertain Leigh East in an eagerly-anticipated derby.