It will be unfamiliar territory this year for Miners as they play there rugby for the first time in the clubs history outside the top tier of the National Conference League following relegation from the Premier Division last year. Everyone at the club knows that there will be some tough challenges ahead this season, but after a very good pre-season the players are determined to put last years disappointment behind them by bouncing back at the first attempt back into the top flight.

Coach Dave Rowlands has named a side with plenty of youth and experience for this Saturdays season opener, with a number of lads coming up from last years u18s in Will Ashworth, Rob Crompton, Joe Digby and Todd Fenlon along with new signings Joe Connor and Mike Govin.

The lads are very excited to get going, we know this will be a tough game against a side who will be challenging for promotion this year.

Pilks did the double over us last year so we are up against it, but I think we are a different animal this year and I can’t wait to see how we go when it matters.

On the rest of pre-season since the Myton Warriors Challenge Cup game, Rowlands added
Pre season has been absolutely outstanding from the boys and as a coach I couldn’t ask for much more.

The effort has been top draw and apart from the little blip against Myton everything else as been really positive.

We have also had two really good hit outs, one against Ince were we come from behind to win in the last couple of minutes, which shows fitness is were it needs to be as this was a massive negative for us last year.

The second game against last years Premier Division champions Thatto Heath ended in a 12-12 draw at the LSV, I thought the longer the game went on the better we got and a massive positive on the day was giving first team debuts to Calum Coleman Andy Badrock and Oliver Crompton who all took it in there stride.

Pilkington Recs like Miners will be looking to bounce straight back up following there relegation from the Premier Division last year, The Recs travel to Twist Lane for this weekends season opener in good form having beaten Wallsend Eagles (42-6) Thornhill Trojans (16-0) and Millom (32-16) in the Ladbrokes Challenge Cup and next weekend take on League One outfit Coventry Bears in the fourth round.

Leigh Miners second play their first league game of the season on Saturday when they travel to Widnes to take on Halton Simms Cross in the league (NWML Division 1), kick off 2-30pm.

The u18s travel across the borough on Sunday to take on Shevington Sharks in there first NWC Premier Division league game of the season, kick off 11-45am.

Also don’t forget that ‘All About The Brands’ will be at the club with their sample sale  from 12pm. At Buy1Get1HalfPrice.com they are all about cheap clothes and absolutely everything they sell is buy one get one half price… 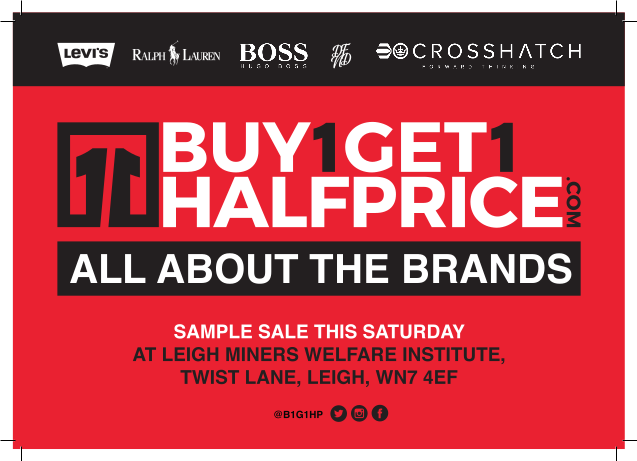 « buy1get1halfprice.com join as club partner Miners Off To Winning Start »