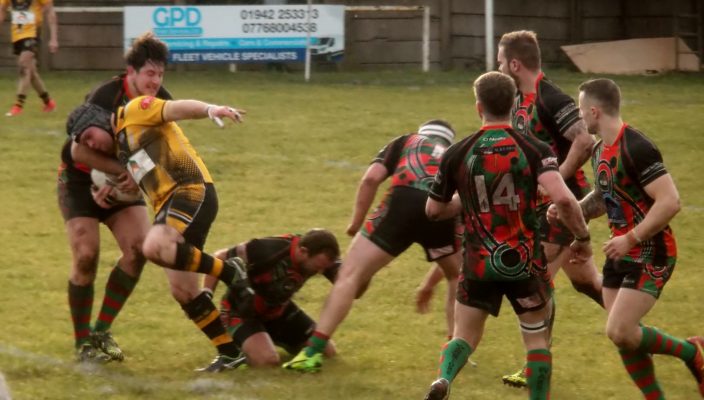 Miners Rangers exited the Challenge Cup at the first hurdle as their first run out of 2018 saw Premier Division Myton edge a see-saw contest. 12-0 up at the break against their visitors Miners fell away in the face of Myton’s comeback after the interval and although a late rally again saw them snatch the lead there was one final twist in the tale as the Hull outfit booked their place in round two and left Miners with just over a month to prepare now for the main challenge of Division One rugby.

Miners opened brightly and dominated the opening half hour thanks to a solid pack performance as Darryl Kay, Frankie Halton, Mark Thomas and Mick O’Boyle put in strong stints in the engine room, and they led when Tom Farrimond put out the pass for Halton to stride his way through to touch down for 4-0. Shortly afterwards and Farrimond was influential again as he linked Will Ashworth into the attack and he in turn fed Todd Fenlon to finish at the corner and double the lead. That though proved one of the last actions for Farrimond who was forced from the field with injury and although Miners scored again in his absence they were destined to miss his experience as the game went on. However a third home try followed on the half hour as Kay stormed through from fifteen metres out for a fine prop forward’s try and 12-0. But before the break Myton, missing several regulars with a flu virus, had hinted they were far from finished with some close calls as Miners had to scramble defensively to hold their line intact.

Two minutes into the second half though and having worked so hard on their own line Miners will have been frustrated that the breakthrough came when one of their own attacks foundered, the pass going to ground inside the Myton half and Adam Piggott first to react to gather in and sprint away to score under the posts. Now it was Myton in the ascendancy and they had a second score when Ellis Wray finished off out wide and 12-10. The game was turned on its head when Ash James hoisted a high kick to the wing and as the Miners’ defence gathered but then fumbled on their goal-line his brother Lee swooped in to touch down, the conversion making it 16-12. Miners weren’t finished though and they showed character to rally and regain the lead with seven minutes remaining, Kay driving on the last and keeping the ball alive as he popped the pass out for Halton to carry the defenders over the line for his second try, Jack Reynolds goaling and a narrow two point lead. There was still time though for one more twist and in the dying minutes Myton provided it, Nathan Slater jinking through at the right corner and Ash James with the touchline conversion to put the visitors into the hat for round two.

Miners Alliance team won a friendly at Mancunians 28-26 whilst the under-18s had a walkover win against Hunslet Warriors in the National Cup.