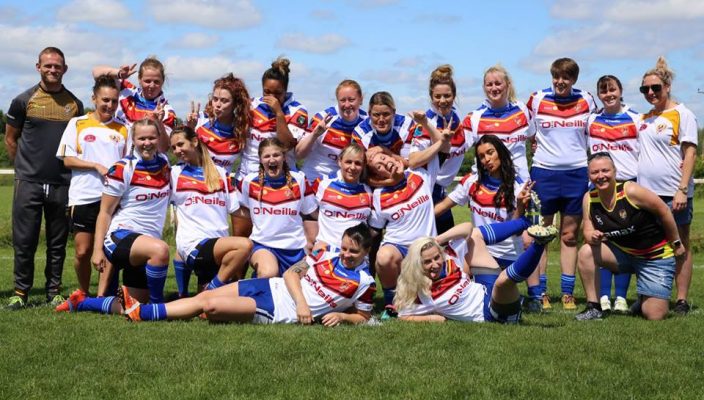 Throughout the season we’ll introduce you to the people behind the scenes at Twist Lane – starting with women’s team founding inspiration Mina Patel. Mina is pictured above (2nd Left) with the Women’s team after the clubs Charity Rugby & Beer Festival last season.

As a youngster many of my friends played for Miners, which started my enthusiasm for rugby league. At the age of 18 I was given the opportunity to begin playing however at this time it was at Hindley as Leigh didn’t have a team. I continued to play rugby for the next 10 years until I became pregnant with my first son. After having my second son I was contacted by the then coach of the girls section to see if I wanted to train with a potentially newly formed ladies team. This was what started my involvement at the club.

My current role as team manager of the ladies has many interesting facets. Along with the usual team manager role of player administration,  fixture arrangements and general support to ensure the coaching staff have everything they require to train the ladies team, I am also able to be involved in a developing sport. To this end I am involved in promoting the sport to young women, highlighting the benefits which rugby league brings both to physical and mental health. As a team we look at how we can use different media to reach as many women as possible.

In addition, I am a member of the rugby committee which enables me to shape the future of the club bringing skills from my professional life into a role which I love.

The best part of being involved which a club like Leigh Miners has to be the social life! However knowing that I am supporting other women to get the same enjoyment and meet ‘friends for life’ like I have been lucky enough to do through playing rugby is something I find particularly special.

As we develop as a female section (including women and girls) it will become more important to have a more sustainable model for all ages. This will require more coaches and admin staff to join the  team. At present we are looking for ways to fill these vacancies through players who are due to retire or who are parents and friends of players who are looking for a volunteer position. There is lots we can do to move forward but its finding likeminded people who want to share the journey.