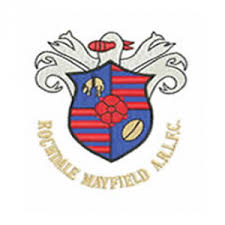 Leigh Miners make the relatively short journey up the M62 on Saturday to take on Rochdale Mayfield in Round 15 of the NCL Kingstone Press Cider Premier Division, Kick off 2-30pm at Mayfield Sports Centre

Miners go into this weeks game on the back of another defeat against West Hull last weekend, After starting the game well and being 16-4 in front Miners let that lead slip with some soft defending and from that Wests took control of the game to win comfortably in the end 42-26. That defeat leaving the men from Twist Lane rooted to the bottom of the table, knowing that if they don’t end this rotten run of results soon, the escape from relegation is going to get harder and harder.

This week at training Micky Higham and Kieron Purtill from the Leigh Centurions have been down putting the lads through there paces, working on defensive shape and structures with there being far to many points conceded in the last few weeks. If Miners are to come home with a much needed two points, defence will definitely be the key because if they don’t bar up all across the field it’s going to be a very long afternoon against a good Mayfield outfit.

Rochdale Mayfield are currently sitting in third position in the table and go into the game on the back of a 29-14 victory in Cumbria against Egremont Rangers last weekend.

Leigh Miners second team are at home on Saturday against Halton Simms Cross in the league, kick off 2-30pm at Twist Lane.

The u18s are on Sunday against local rivals Wigan St Judes in the league, kick off 11-45am at Parsons Meadow.