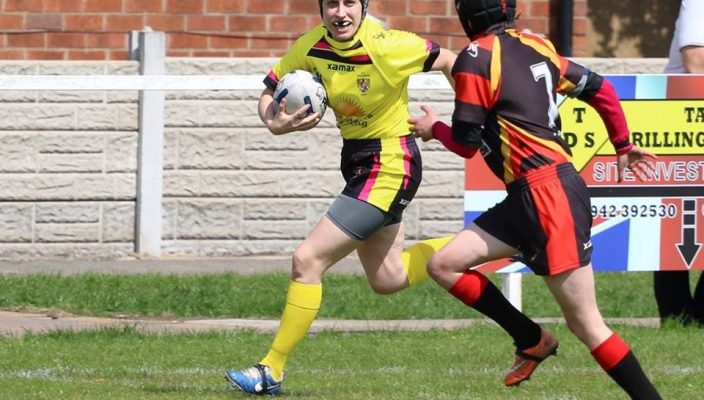 Genna Banks : Being Part of a Community Club

At any amateur club it isn’t just the off-field volunteers who are jack-of-all-trades, you’ll find the players pitching in as well and that is certainly the case with women’s team winger Genna Banks who triples up as a member of the girls’ team coaching staff and as the senior section’s safeguarding officer! Genna originally began playing union with Leigh RUFC however decided to give the thirteen-a-side code a try and joined the Miners Rangers ladies when they were a fledgling outfit in 2012. “I loved it straight away, the community feel of the club, the set-up, the coaches and most importantly the girls.

The ladies team has had some great runs in the Challenge Cup, won numerous plate finals and had players represent on a national level. For me personally my highlights are the first final we won back in October 2012, beating Leigh East at home after being battered by them on a few too many occasions, and I suppose I better say meeting my husband Jonny [Carroll]!”

“The women’s league has seen quite a few changes over the past few years, with the introduction of the Women’s Super League beingthe latest challenge. This has hit amateur clubs ladies team quite hard as existing and new players have been drawn to the Super League and not the community clubs, basically taking players from one team to form another and not necessarily increasing participants of the women’s game. My preference would have been for all Super League clubs to start with u16s/u19s and attract new young players to try the game as they able to play for a team that they may support rather than diving straight into open age as a quick win. Huddersfield Giants have gone this way and will in a few years enter an open age team with the young players they have developed. Despite the challenge I hope this year we can still manage to increase our numbers and dominate the Championship.

“It has been important for us as a ladies team to have a girls section. Celia Farrimond has worked tirelessly to set this up. Hopefully the young girls she has brought to the club will replace us older ones in a few years’ time. I got involved with the girls section as my daughter Grace wanted to play and even in this short period of time I have been involved we have seen numbers grow and grow. We currently have 20+ girls down at training and the hard work is starting to show, both teams won their opening fixtures and really were a credit to themselves and us. I didn’t think I would enjoy it as much as I do, but seeing young girls love thesport and make friends has been priceless and unbelievably rewarding. Retirement has well and truly been put off as I will now have to wait to play alongside Grace, just so she knows who’s best, not sure who I am trying to kid, as she is better than me already, but she doesn’t need to know that, just yet!”

« Lock Lane (Away) Thornhill Trojans (Away) »